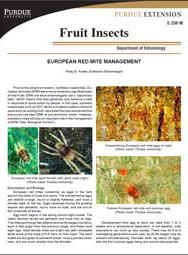 Prior to the advent of modern, synthetic insecticides, European red mites (ERM) were not considered a significant pest of tree fruits. ERM are what entomologists call a "secondary pest", which means that they generally only became a pest in response to some action by people. In this case, synthetic insecticides such as DDT, which provided excellent control of pests such as codling moth, also killed the natural enemies that previously had kept ERM at sub-economic levels. However, predatory mites still play an important role in the management of ERM.